7 Reasons Why You Should Switch to IP Phones from Analog

Sale Products
There are no products matching the selection.
Lastest Posts
Categories
Tags 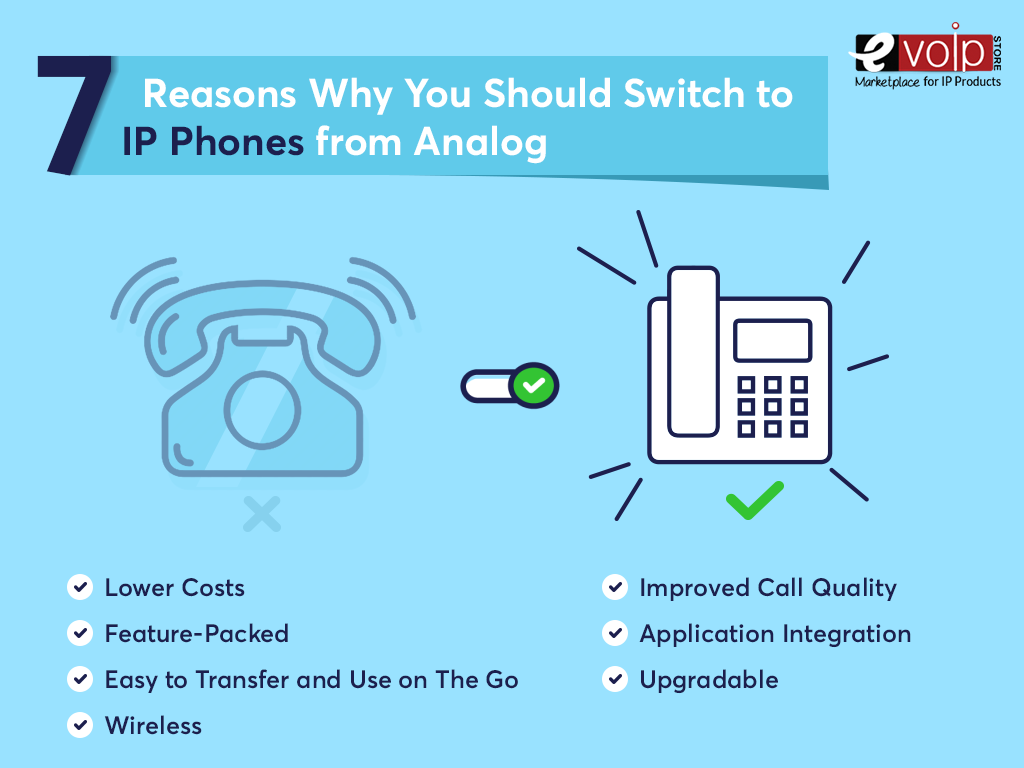 IP Phones are the future of the telecommunication industry that has come a long way. The telecommunication system began with trunk calls that included sophisticated wiring. Connecting a caller with the party calling involved an advanced method of initial connection with the trunk workplace manually in order to place the call to several recipients. Sometime after the trunk call systems, with a lot of advancements in technology, digital phones were introduced. These phones improved the call management feature. However, the specified improvement in call quality was only a fraction of the amount of a far-fetched idea.

A major revolution hit the telecom industry with the introduction of IP Phones. These phones provided far better call quality and straightforward connectivity with the rest of the globe. However, enterprises were and still are to some extent reluctant to make the switch. To ease their reservations, here are 7 major reasons why entrepreneurs ought to select and switch to IP phones or VoIP telephone handsets.

One of the major advantages of using VoIP telephone handsets is that the solution is extremely cost-friendly. As the system works over the internet, the call prices incurred reduce to a great extent. The international and local calls may be made at minimal rates, permitting companies to reduce the huge costs that were earlier being incurred on analog phones.

While some VoIP telephone handsets don't always offer phone directory services, most of these do offer plenty of other features. Some VoIP phone services offer voice-to-text transcriptions of your voice mail messages, allowing you to receive emails or SMSs about the calls you missed. Additionally, these are great for conference calls and depending upon your specific service provider, you might even be able to make video calls too.

3. Easy to Transfer and Use on The Go

With traditional phone service, it can be time-consuming to transfer your service to a new location if you are moving. Not only do you have to call your local phone company and arrange for a transfer of service and phone number to your new address, but you may also have to pay a fee for the transfer as well. On the other hand, VoIP telephone handsets are much easier to transfer between locations since they utilize your internet to make calls. This means that you won't have to contact a phone company to get your IP phone service operational again.

Furthermore, most VoIP systems are also accessible while traveling, this gives you greater versatility when it comes to making calls or handling business from a different location.

All the internet services are provided via Ethernet cables that are connected to a router for providing a wireless network. Since IP phones work on the internet protocol, these don't require extra cabling as it is in the case of analog phones. And, being wireless also gives an added advantage of mobility to its users.

Data over the internet is passed on in the form of data packets. Similarly, in VoIP telephone handsets, the voice of the caller is converted into small voice packets and is transmitted over the internet via servers to the called party. This process improved the call quality exponentially, giving its users the benefits of clarity and extremely smooth communication.

As IP phones work over the internet, several VoIP applications can be integrated with them. Businesses can link several productivity tools such as presence sharing, softphones, directory, instant messaging, etc. with their IP desk phones. This again provides an added advantage of mobility to the users and integrating such tools allows users to remain in touch not just with the outside world but also their office colleagues over smartphones anytime, anywhere. Additionally, VoIP telephone handsets also simplify the complications involved in multi-location connectivity through internet connectivity.

Being on an IP platform, the future of technology upgrades can be easily tailored and adapted to the existing IP phone systems. Hence, upgrading the existing telephone systems becomes almost free of cost and easy to use.

While VoIP services are still growing and expanding in the telecommunication industry, they have already become quite popular thanks to the wide array of benefits they offer. In fact, most people are now choosing to switch from an analog phone system to a VoIP telephone handset for both home and office use. These 7 reasons are enough to make you consider the idea of adopting IP phones and discarding the old-age analog phones for fervent business growth.

What are you waiting for? Switch to IP phones and move in line with the technological advancements of telecommunication.